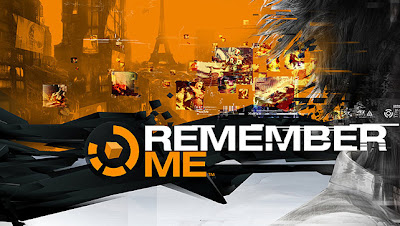 I think it's a testament to the game that I beat it three times in a week and did a youtube recording within three days. I can't get enough of this game. Remember Me was under a lot of fire during its development because it's protagonist was female and a lot of companies decided it wouldn't sell well. Eventually Dontnod Entertainment got Capcom and I'm glad they did. Capcom is a favourite company of mine and Remember Me is one of my top ten favourite games now. It impressed me in a way that utterly shocked me. I've not been this taken up by a game in a long time. It came out in June and it had always been on my list, but money isn't in abundance, and other games took priority. It went on PS+ for free last week and I grabbed it up so fast, and I am thrilled. Had I know it would be this good I would have paid full price in a heartbeat. Well let's get on with it. 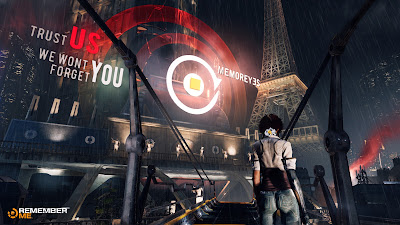 The graphics are quite beautiful in their surreal, cyberpunk, futuristic dystopia way. The models for characters and enemies are done very well, especially the enemies you fight. The twisted creatures that populate Neo Paris are done in a creepy and baneful manner, and the quality of the model really shines through. The world is grimy and dark in most places, but on occasion the blessed sun shines through and illuminates the smooth skyscrapers and bright white, and silver, bridges. The world is so beautiful and tragic, and the combination of splendid lighting and model quality is obvious from the beginning. It's not just the outside that is beautiful, however. Traversing the buildings, prisons, and hospitals, as well as tunnels, sewers, and construction sites, makes for a sometimes creepy and disconcerting journey. There are two things I always look for in a game, as well, and that is hair and drinking. The hair was amazing, but there were still little obviousness that we haven't managed to get right yet. As for drinking... yea we're still a long ways off.

Next I want to.. gush, I suppose, about the music and audio of the game. Holy hot damn guys, this soundtrack is probably one of the best I have heard in a decade at least. It's definitely the best game OST on this gen of consoles. As soon as it started playing I was hooked. It's so... I don't even know how to explain it. It gets in to me and just eats away at my mind so that it can have a place to live. During the course of the game, it's inserted very well into situations. Combat uses it for not only combat music, but also when you're chaining combos or when you get hit, the music reacts to it. I got the soundtrack before I was even done with the first play-through, and it's pretty securely stored on my ipod for all listening pleasure now. As with the audio comes the voice acting. It's really great. I played it through in English, French, and Italian, and all three voice actor sets were quite amazing, to be honest. I enjoyed their performances quite a lot, but my favourite had to be the English version of Edge. Wow... he really nailed it and god-damn if he didn't make me totally feel for his character in a pretty deep, and tragic, way. 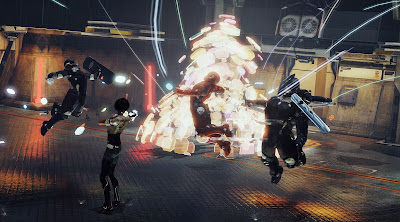 The interface is great and there's not too much to say because it's so minimalistic. You have the objective that pops up towards the middle, but only briefly, and when you're not in combat, most of the HUD isn't seen. When you are in combat, it gives you the basics at the bottom left (health, focus, and cool-downs) and keeps track of which combo you're doing in the bottom middle. It's integrated brilliantly and doesn't detract from the game play. Since I mentioned combat and the HUD section is so small, I'll start on combat here too. I wasn't thrilled with it when I first started to use it. I didn't like the combat movement, and I didn't understand what they were trying to explain in regards to dodging and pressens. Pressens are your combo moves, basically. You have power pressens (they add damage), regen pressens (health obviously), and cool-down pressens (to speed up cool-downs). The explanation of these wasn't as clear as I'd've liked them to be, but just through experimentation, I was able to figure out what was working and what was not working. As this happened, I grew used to the combat, but I can't say I like it. It's not that I hate it any more, I just... am not really too enthused with it. It's just a thing that's there. The cool-downs, however, were pretty intuitive and nicely done, as well as dodging. Thankfully they indicate when the best time for a dodge would be with a red ! in the direction it's coming from.

All right so we have audio and graphics, but what about general game play? It is a wonderfully free moving, parkour type game with brilliant exploration and platforming. There is also another awesome thing you can do called Memory Remixing. These puzzles let you go into the memories of certain people and change their memories to your advantage. Memory stealing, syncing, and remixing are all part of what makes this game pretty unique and fun to play. Well I say fun, but it's pretty clear that I'm obsessed with this game and everything in it. The only real complaint I had was the combat and now that's just meh, and not really a complain. The story is very tricky and was a delight to go through. I got very involved in it and shed a tear or two during it's course, I don't mind saying, not to mention the veritable scream I let out at the end of the game when someone dies who I'd grown quite attached to. This isn't a spoiler as many people die in games, especially towards the end, and if you think this game is safe from it, you're mistaken. 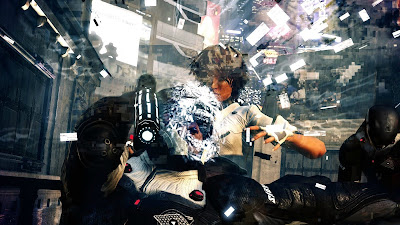 Spoilers for a paragraph, it's in italics so just skip it if you don't want the story broken open.
There are a few ways you could take the story of this game in regards to the title of the game. The game deals a lot with memory, obviously, and loosing it, finding it, getting it messed around with, but Remember Me... in my opinion it's to remember Edge. For me, the game was about him as much, if not more, as it was for Nilin. He was created from all the abuse, fear, malign, and tragedy that no one wanted in their life. All he wanted was to end, to be gone, to not have to live in the cesspool of despair that humanity ran away from. This was him using the only thing he could, Nilin, to gain freedom... and for his sacrifice, and suffering, we must remember him. Man... I can't even think about the end without getting all teary. Goddammit.

The trophies aren't that difficult although at the beginning they looked as though they could be quite squirely to get done. Getting this platinum was amazing, and made Remember Me my sixth platinumed game. It's more that they take a little bit of time to get, not that they are too hard. The difficulty in getting them is moderate, depending on your skill in the game. All the combo mashing did ware on my hands a little bit, but it's nothing like a DMC or something, so it was all good. I really can't express how much I loved this game. It came out of nowhere and blind-sided me, and I recommend it to everyone. Even if you don't like these kinds of games, at least rent it and try it out. Please don't dismiss it. If there ever comes a time when I don't have PS+, for some reason, this will be the first game I buy. 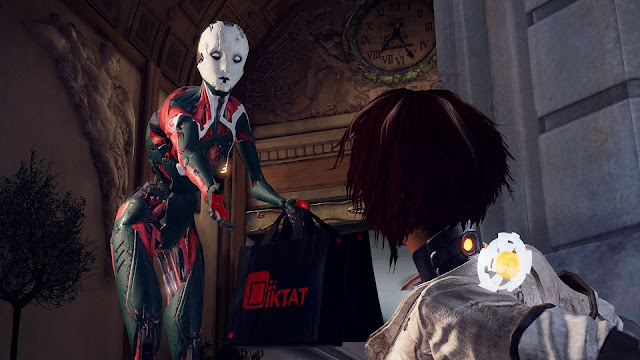