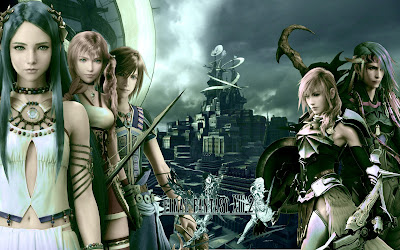 So, I wanted to wait a little while to do my Final Fantasy XIII-2 review so that I could go through a little bit of the DLC that was promised to us. Now that that has occurred, I'll proceed. First of all, because I wanted to get XIII-2 on the PS3, I got XIII on the PS3 & traded in my 360 copy. This pained me a little as I only had two more achievements to get in the 360 version to get 1000/1000, but I knew I wouldn't be going back to that game. The PS3 version of the game is much nicer, more beautiful, and seems to run better, but it just might be that I hadn't played it in over a year when I got the PS3 version. As an added bonus, a save file from XIII got me some extra things in XIII-2.

The graphics have not failed to impress me and even though they aren't too incredibly different from XIII, they seem crisper and more fluid. Blu-ray also makes it even more lovely and I can appreciate the difference. The scenery, however, is where it really shines. Although the characters look mostly the same, the graphics of weather, flora, and fauna are so much nicer. I was very impressed at the weather in particular. There is one place that you can control four different types of weather and it's just amazing. It seems like a small thing, but I really enjoyed it when it rained, or when the thunder cracked. Oh man, it was great. Along with the crackling thunder were the other sounds of the game, obviously. Done well, as usual; I can't really see them screwing that up, but I am really torn with the music in XIII-2. Some of it is exceptional and some of it is just the worst ever. Whereas the majority of the voice acting was splendiferous, I really, really hated Chocolina's god damn voice. Every time I had to talk to her I just wanted to brick her. Serah's voice was all right... annoying, but well delivered. Noel, Hope, and Caius were my favourite voice work in
this one. Just so precise and wonderful to listen to. And footsteps? Nope! I'm going to diverge from my normal procession for a minute and mention the interface of the game. XIII had an OK interface, but it was hard to see at times. XIII-2 has corrected this and made it a lot easier to read and what's even better is they included an option to magnify whatever your selecting. Making the text bigger is so nice since I have a lot of issues see shit at a distance. It really helps. Well now, XIII was much criticised for its very linear game play. The linear story is still there, but it does a good job at masking that, which is fine. All games are eventually linear, but the story needs to hide that. It's done with a lot of time travelling to get to where you need to go, find the pieces that you need to open the next time gate, and new time lines to explore in order to see alternate realities. All these eventually come together in getting to the end, so whereas you might decide to do one area before the other or make some choices different, you get the same ending either way. It's not a bad thing; I did enjoy going through the worlds and seeing all the different realities the game had to offer.

Another part of the game play, which is also part of the combat, is the monster taming aspect. Some relate it to Pokémon in that you capture monsters, then level them up to use in battle. OK, this is true, but I didn't really find it much like Pokémon. At the end of a fight, you have a chance to get the crystal of the monster you fought and then you can level them up with monster food items you find/buy in the world. There are monsters for all classes in the game and they fill the slot of the third person in the party. It's not a bad system. I didn't revel in the glory of it, but it was actually nicer than having to manage another stupid character I didn't care about (the other being Serah as Noel was great). You can make up your own Paradigm packs to whatever combination you want if you have the monster crystals, but really I used Rav/Rav/Rav and Rav/Rav/Com the most with Med/Sen/Med on the side. You can only have three monsters equipped so unless you want to put a load of stupid time into levelling up one of each monsters and switching constantly with your packs, just stick to the three monsters you'll use. While I'm here, the combat system has been so very much improved upon and I was elated to see that. Switching Paradigms is instant and as soon as you click on your new set up, everything is instantly usable. And the best thing? When the main character you are controlling dies, it switching to your other. You don't die! I'm so very happy they changed this issue as it was the worst thing possible in XIII and made no sense at all. You can change your party leader between Noel and Serah to utilize their specific
abilities or to just have a change up in battle. The classes were tweaked a little, though more so through the changes to the Crystarium. Instead of learning the classes and specific ability tiers, you just have one Crystarium per character which diverges onto the other class paths. At certain points in it you can choose one bonus out of a few (though you choose them all eventually). It's a more linear way to do it and I thought it was way better than the previous, bulky process. I had a really good time in the different time lines. The story was engaging and the characters were pretty awesome, except for a few retards, one of which was my female party member. Ugh. It was still better than having to listen to Vanille cackle all the time or Lightning whine like a five year old. I was sad that Hope couldn't be a team member, but thrilled at his part in the game. He was my favourite character in XIII and I was very happy to see him back. Noel's story was incredible and really made me feel for him and his plight. It was so well done, bravo. There is so much to do in the game, including mini games and all the awesome trophies/achievements you can get. The end times in the game is fantastic. The ending fights, the ending cinematic, and even the song was pretty cool. It was worth it for the time I put in.


The post game was good too. When you beat the game you are given an item which allows you to view paradox endings and those are really sweet. You can also unlock a few new battle additions like the choco stopper (I think that's the name, it's 2am and I don't have the game turned on) which speeds or slows your battle. I sped up my battles and they go by so quick its awesome. Grinding is a lot better, but the thing is that it also speeds up the cut scenes, which is annoying. I wish there was just a battle speed up and a leave the cut scenes the fuck alone setting. Ah, well, I know what went on in the cut scenes anyway, but still. I got a lot of the trophies done, though I can't remember how many at my first beating of it, but it was a great amount. And now the topic which I hardly ever write about: DLC. Usually I will write a review before any DLC comes out, but the DLC was so hyped for XIII-2 that I wanted to wait a bit. Promises of DLC had been around since XIII-2 was announced and boy have they laid it out. Colosseum battles, costumes, weapons... they have a lot to offer and even more on the way. I bought a few of the weapons, some of the outfits, and some of the Colosseum battles expecting joy and for the most part, that's what I got. I like the outfits I downloaded and the battles in the Colosseum are great. I still haven't been able to beat Ultros/Typhoon, but I am slowly getting them down every time. The Assassin's Creed costume for Noel is the absolute best and the N7 costume for Serah is my favourite for her. I don't see myself getting any other costumes, but the Colosseum battles are awesome and, except for Sazh and Jill, I
have got them all. Sazh and Jill I didn't get because I hated their characters in XIII and have no desire to acquire them. Because of the eventual linearity of the game, there is no replay value, but I guess they got around this with the post game and DLC. There is really a lot to do and I'm not even done with it all yet. I was sad to not see any Espers (Eidolons), but I guess they aren't needed due to all the other things in the game. Weapons and armour were a lot like XIII in that you upgraded what you got to make a more powerful weapon, though you did have to find materials to make most of the items. That was a pain sometimes, but in the end it wasn't too much of a trial. I was also happy to see that the weapons you made in game were more powerful than the DLC weapons, overall. Of course, it all depends on what you want to do with your character as to the weapons you used; different attributes and abilities.

Final Fantasy is a huge series and full of many games with their own spin off, but that being said, it's not for everyone. A lot of people are also sick of the series and that's their right, but I would still recommend playing this game, at least once through. It surprised me, I admit it. I wasn't going to play the game, but in the end, how could I not. It's Final Fantasy. Give it a go if you're interested in JRPG's. It's worth some time :)